At long last, the iPhone 5. We just got our hands on Apple's latest smartphone following its unveiling in San Francisco, and suffice it to say, it's a beautiful thing. Some might say we've been waiting for this moment since October 4th of last year, but another crowd may say that the real next-gen iPhone has been on the burner for much longer. Indeed, this is the first iPhone since June of 2010 to showcase an entirely new design, but it's obvious that Apple's not going to deviate far when it comes to aesthetics. 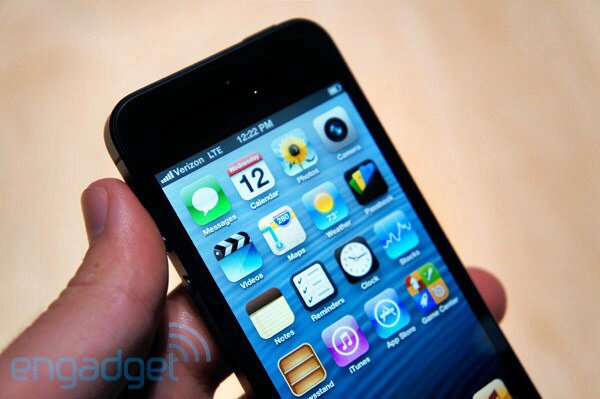 Apple followers will aptly recall Steve Jobs' quote in July of 2010 -- you know, that one about "no one" wanting a big phone, with current CEO Tim Cook seated just feet from Steve as the phrase was uttered. Now, however, Apple's inching ever closer to that very realm, with an elongated 4-inch display that enables new apps to take advantage of more pixels (1,136 x 640), while legacy apps can still operate within a familiar space. The phone itself doesn't feel too much different than the iPhone 4 and 4S; yes, it's a bit taller, but by keeping the width the same, you'll utilize a very familiar grasp to hold it.

In typical Apple fashion, even the finest details have been worked over tirelessly. The metal feels downright elegant to the touch, and the same line we've said time and time again applies here: there's no doubting the premium fit and finish when you clutch one of these things. Yeah, the headphone port's now on the bottom, but avid Galaxy Nexus iPod touch users shouldn't have too much trouble adjusting. 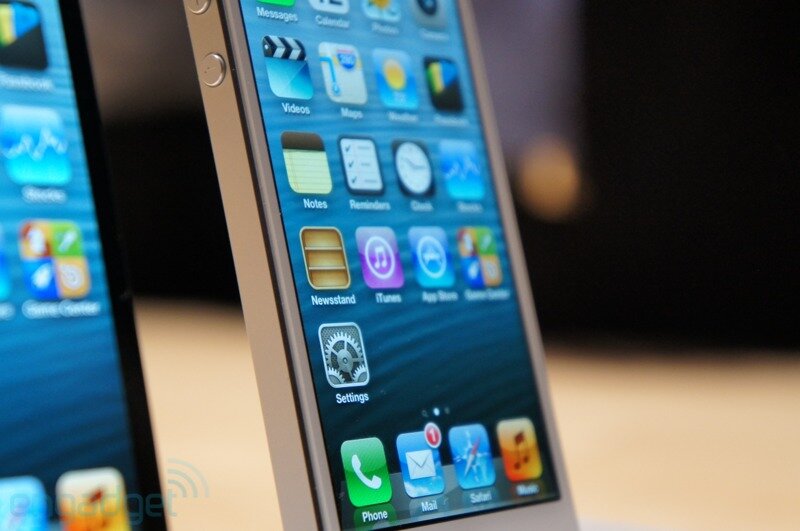 The rest of the leaks, by and large, were proven correct. High-speed LTE is being included in an iPhone for the first time, and the new Dock Connector is indeed smaller. Arguably, that's the change that'll cause the most headaches for longtime iDevice users -- if you've purchased an automobile, a speaker dock, or any of the other zillion iReady products in the past half-decade, you'll need to pony up for an adapter to make things work properly.

Apple's made this one lighter than before, and while the outgoing flagship never really felt heavy, this one feels impressively light. After all, it's both taller and lighter. The display -- which meets sRGB color specification -- now has an integrated touch layer, and Apple's not holding back when it calls it the "world's most advanced display." Sure enough, it looks beautiful. Of course, displays across the industry have been becoming increasingly sexy to look at, and Apple's newest most certainly pops when you ogle it. Is it better than the 4S? For sure, but it doesn't make the 4S' panel look dated by any means. The anti-glare measures implemented are highly appreciated, too.

The new A6 chip, in typical Apple style, hasn't revealed itself in terms of raw tech specs. But at a glance, it's definitely quicker than the chip in the 4S. Much like the speed increases between the iPhone 4 and 4S (and before that, the iPhone 3G vs. iPhone 3GS), they won't take you by storm right away. But, use it for half an hour and you'll have a hard time going back to a slower chip. The transitions are smoother, switching between apps is a bit quicker and everything just generally feels incrementally faster.

We'll be grabbing video and putting some of the new iOS 6-specific additions to the test, but for now, feel free to cast judgment on the design after peeking the gallery above.