Good: Easily the most exciting aspect of Wartune is the combat. Unlike other MMORTS games that avoid any graphical combat whatsoever, Wartune provides players with highly graphical combat features that use detailed animations for skills and abilities.

Bad: As with all MMORTS games, Wartune does revolve around building and training timers. This does mean that players will sometimes have to wait before having access to new features, however, this is nowhere near as severe as other games so we only consider it as slight drawback that is almost unavoidable in this genre.

Wartune is the latest MMO title from popular publishers, R2Games. Wartune borrows features from a number of popular MMORTS and MMORPG games and combines them with high-quality graphics, and arguably one of the greatest real-time combat systems ever seen in this genre.

The first thing you’ll notice about Wartune is the graphics, and they’re far from disappointing. It’s a browser-based title and requires no lengthy download or plugin installations, but the graphics are more impressive than some of the 3D MMO games we see today. The environment, characters and enemy models are all highly detailed, offering players immersive graphics that aid every aspect of the game play.

Wartune wastes no time in introducing players to its unique combat system, it’s one of the first things you do during the tutorial. The combat system feels similar to older turn-based titles such as the epic Final Fantasy series. The auto-attacks are turn-based and activate automatically, allowing players to watch their chosen class unleash awesome animations on their enemies. However, more depth and strategy is added with the inclusion of character abilities. Every class begins with 1 powerful ability, but they unlock more as they level up and progress through the game. The abilities are nothing short of devastating, offering players powerful skills that can dispatch of enemies easily. The animations tied to each ability are highly impressive, removing the common notion that browser titles lack in the graphical department.

Finally, and not really game play related, is the loading screens. Wartune is among the only browser MMO games that offer an interactive mini-game during loading. Although there’s minimal loading times during the game, players are not faced with boring loading screens at they get to play a whack-a-mole style game smashing a small rat with a large chunk of meat. This simple feature really explains Wartune to the dot, never a boring moment and full of innovation. 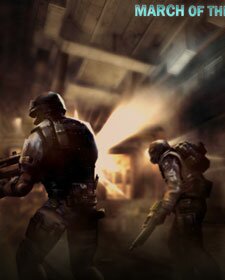 Finally! This is just what I was lokoing for.